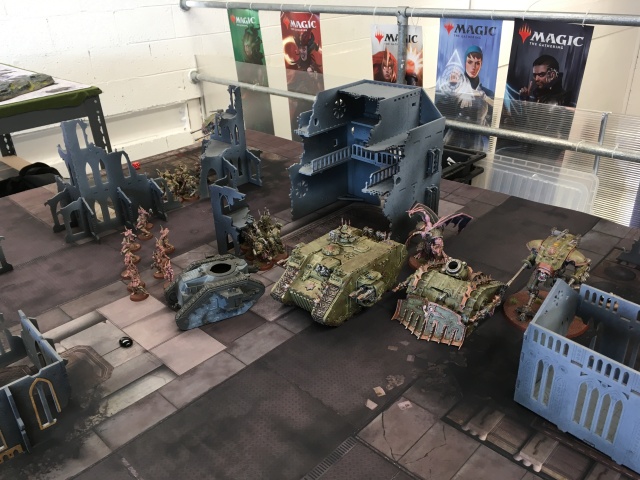 I described my list before the game as a “bit of a splurge”.  By that I meant that my list bent itself into somewhat of an odd shape so that I could take the units that I was after.  In particular I wanted to see my Armigers on the table again, play my new Nurglings and take the Land Raider with Typhus aboard (which I didn’t think this player had seen in use before, I was wrong about that).  And that’s a lot of points already taken up.

The Nurglings in particular are troublesome to fit in, they’ve not got the Death Guard faction keyword.  They share the Chaos and Nurgle faction keywords with the other Death Guard units, but if I put Death Guard units into such a detachment then the Death Guard units lose the Inexorable Advance (helbrutes and infantry only, rapid fire out to 18″) and Plague Host (objective secured for troops) that they would have for being in a pure Death Guard detachment.  So you either have to take an Auxiliary Detachment, and pay a 1CP tax, or build up another detachment type and accept those consequences.  What I did was to take a Patrol detachment with a Daemon Prince leading the Nurglings.  The Daemon Prince doesn’t benefit from Inexorable Advance (not infantry or a helbrute) or Plague Host (not a troop unit) so there’s no direct loss.  But if I hadn’t have done this I might have been able to take another detachment of something and pick up one extra CP.  So there’s a tax however you roll it.

So, anyway, I have some decent anti-armour on the table.  I take a Daemon Prince with Wings and a Plagueburst Crawler.  They both want to get up close, the Daemon Prince is the Warlord with the Arch-Contaminator trait.  He’ll be able to help the Crawler with re-rolls of ones to hit as well as re-rolling any failed wounds for Plague Weapons.  He’ll stick near the Land Raider to help it out with re-rolls of 1s too.  When Typhus and his Deathshroud leap out of the Land Raider he can buff them as well and be buffed back in return with an extra attack via the Deathshrouds.

And there’s now not many more points to play with.  Two six man units of Plasma equipped Plague Marines lead by a Chaos Lord (for re-rolls to avoid exploding overcharged Plasma weapons) and a Poxwalker unit to act as a screen against deep strikers finish the army off.

So I think I have two flanks.  The Land Raider, Daemon Prince and Plagueburst Crawler will take one and will be my mobile army.  The Plague Marines will take the other and will try and grab or hold onto something.  The Armigers will be split onto a flank each and will try to stay out of melee range and use their 60″ ranged weapons to take on enemy army.

You can read Cadian Shock’s much more competent blog article, both in terms of writing and not being a cheating wotsit (see later) here:
https://cadianshock.com/cadians-catachans-vs-death-guard-1750-points

We rolled the Disruptive Signals Maelstrom of War mission from Chapter Approved 2019.  We could both throw out six objectives from our objective card deck before the game began.  So I threw out such cards as holding all the objectives or grabbing those in the Guard’s deployment zone, these are tough for the slow Death Guard to get.  I also knew that I wasn’t facing anything that could Fly, so that card went too. 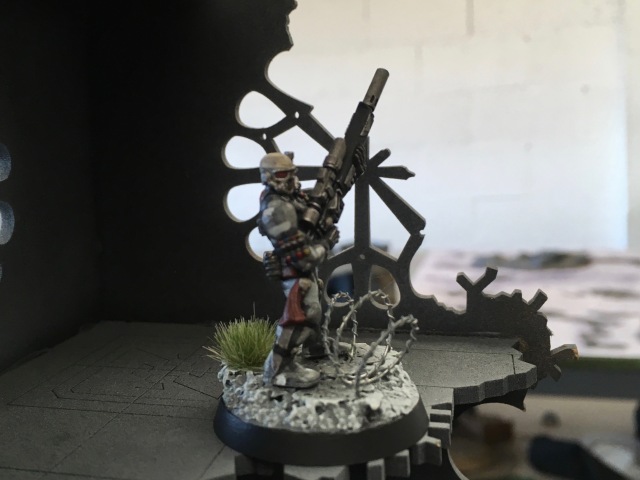 I had to set up first.  I pushed my forces pretty far forward, the Land Raider group on my left flank and my infantry group on my right.  There was an Armiger on each side, nice and separate so getting both into melee would be difficult, hopefully.

The Guard could respond, and they did.  Infantry at each back corner, more infantry forwards with the Hellhounds and the artillery lurking at the back.  A lone sniper took up a position atop a tall building, he would be pretty much unassailable up there and had the range with his gun to make use of it.