When I ordered my second Forge World Contemptor Dreadnought if I spent a bit more I’d get free postage.  So I did what any sane modeller would do and gave GW even more of my cash and added a Sorcerer of Nurgle to my basket. 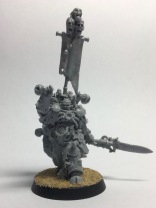 This would be my first Forge World regular sized miniature, and it was an experience.  He’s packed with lots and lots of detail, but there are also lots of moulding imperfections and it can be tough working out which is which.  There were a few bits that I had to cut away after I had painted some of it when I trigged that they weren’t meant to be a part of the model.

I did a couple a new things while painting this.  The first was to try a different recipe for the flesh.  I’d seen some Plague Marines that I really liked the look of on Twitter, the work of this chap is brilliant.  So I asked him how he did it and gave it a go.

I tried it out on some Nurglings and liked the look.  It wasn’t as good as what the creator could manage but it looked nice enough and it looked different to my other flesh.  So I would use it for Necrosius’ head.  The recipe was:

White basecoat then glazes/washes of Reikland fleshshade, carroburg crimson and Druchi violet (used sparingly, then highlights with palid wych flesh and white scar. The Main trick is to ensure most of the shading goes on the sides of the head, keep the top of the head quite clean

The next new thing was a different colour scheme for painting the rotting heads on the top of his banner.  This came from, I think, one of the GW painting videos on You Tube.

I’m not much of a “layer” painter so I worked them as lighter or heavier drybrushing. So the layering with Cadian Fleshtone was very heavily applied to pretty much everything but the deepest areas where as the final one of Ushabti bone touched only the most raised details.

Then final new thing was the banner, oh the banner…  I nearly left it off as I just couldn’t get it to sit nicely on the backpack.  It just glues on top of it, and it felt insecure and wobbly.  I didn’t want to leave it off so I drilled a small hole into the top of the backpack and then recessed it by a millimetre or two.  Very solid.  But then one of my kids knocked it over while spinning on my desk chair (wheeeeee) and it snapped.  So it’s had to be glued anyway.  We’ll see how well it survives the tabletop.  So once the banner was done I decided to try and freehand a sign of Nurgle onto it, and came close to spoiling everything… 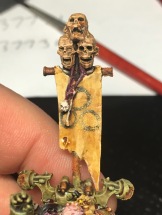 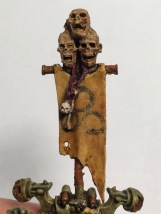 My first effort was just ugly looking.  It just didn’t look right at all for reasons that I can’t quite put my finger on.  To thick?  Too clean?  Too crisp?  I was on the verge of painting over it completely when I had a word with Jake over at Cadian Shock.  He suggested sponging some of the original colour over it to fade/weather it in to the background.  The trouble was the original background colour was white heavily stained with washes of Seraphim Sepia.  So I did it with the white and then washed over it a few more times.

And that did seem to do the trick.  It made it look faded and worn away, so suitably Nurgly.

I might add some Nurgle’s rot to the Nurglings and some of his wounds but other than that I’m calling this done.

8 thoughts on “Necrosius the Undying”