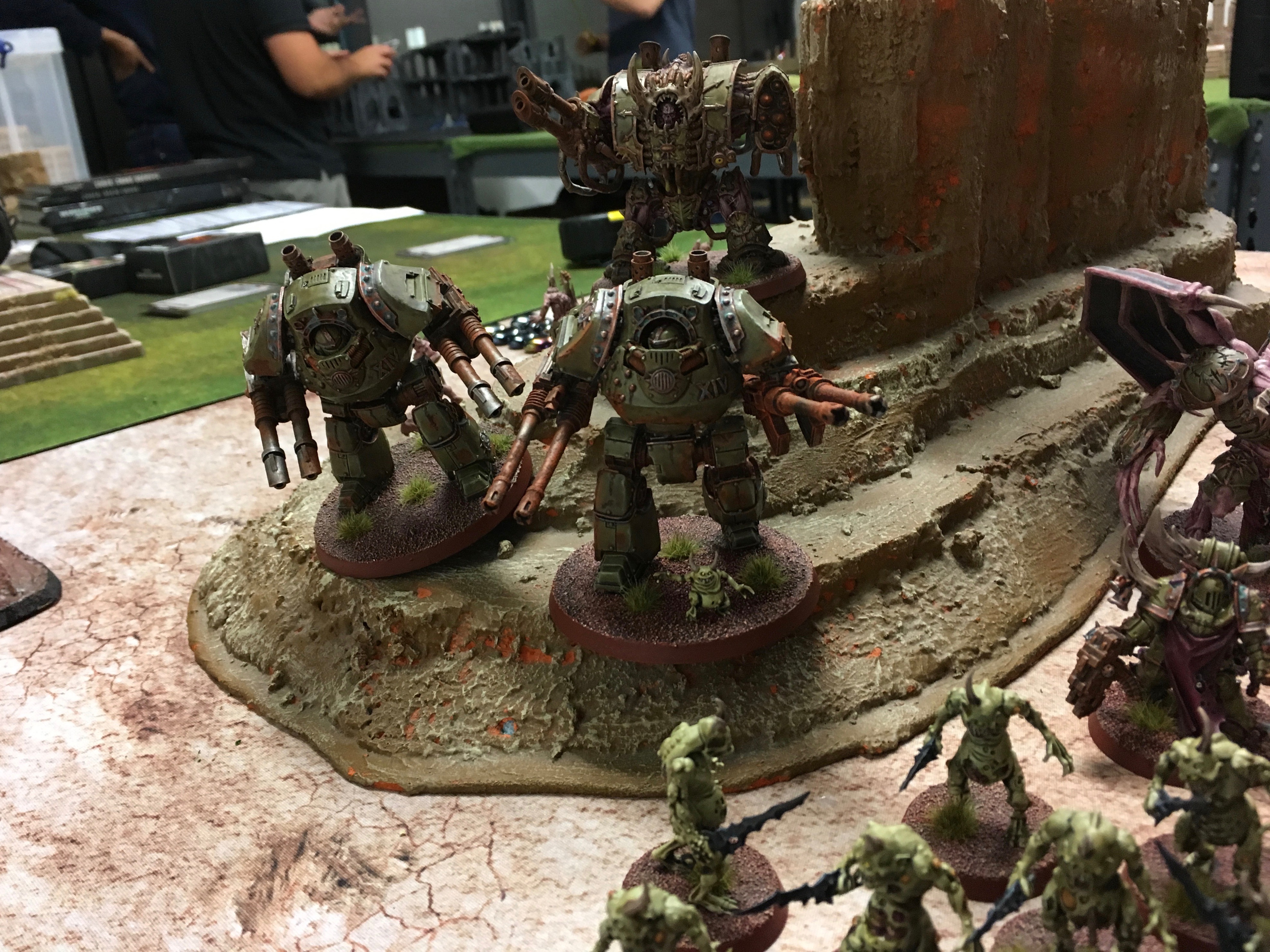 This is a rematch against Cadian Shock, the last time we met he out played me and tabled my army.  Since then I’ve got my Daemon battalion onto the tabletop, how would I fare this time?

END_OF_DOCUMENT_TOKEN_TO_BE_REPLACED 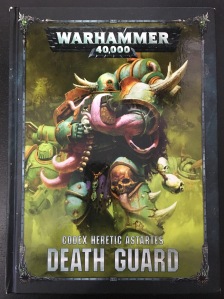 I went back to mono-codex Death Guard for this game.  The size was dropped to 1,000 points in the hopes that we might manage two games.  My Nurgle Daemons battalion is a heavy investment at 768 points, and I felt that I wanted a bit more shooting then I could fit in around that.  So I went for pure Death Guard, and after saying that I wanted to be a bit more shooty I then decided that it would be fun to try and work on my melee Plague Marines again.  Plus I now have two rusted Rhinos, so this would be a good excuse to get them onto the table.

So my melee Plague Marines needed to get into combat quickly, so they would go into one Rhino.  The second Rhino was to carry some Plasma equipped Plague Marines, and they’d need a Chaos Lord for re-rolling those 1’s when overloading.  A Plagueburst Crawler was also taken so as to give something else to shoot at other than my Rhinos.  And now the list pretty much wrote itself.  Some Poxwalkers for objective holding and board control and a Deamon Prince to offer a fast moving threat along with the Plagueburst Crawler.  To fill up the Rhinos I popped a Foul Blightspawn into each.  And now we’re good to go.

END_OF_DOCUMENT_TOKEN_TO_BE_REPLACED

This was a rematch against the Space Marines that I took on in my last game, we’d upped the points to 1,500 for this 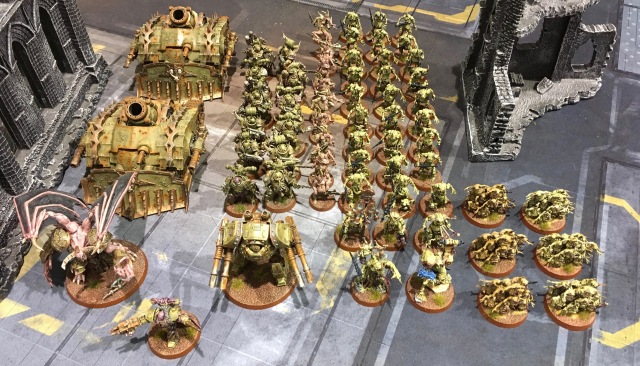 This time I was focussed on trying to integrate my Nurgle Daemons with my Death Guard.  The points had been upped so I had a bit more room, but it was still going to be tight.  So I made the decision to drop Rotigus.  This meant that I could take two elements to my Death Guard force.

END_OF_DOCUMENT_TOKEN_TO_BE_REPLACED

While working on my second Contemptor Dreadnought my side project has been to rust up my two Plagueburst Crawlers.  I’m tentatively labelling these as done, but I might well go back and add a bit more rust once I’ve lived with them for a while. 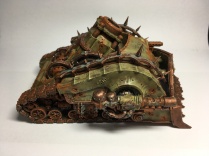 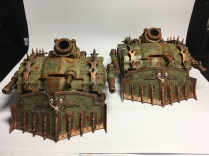 END_OF_DOCUMENT_TOKEN_TO_BE_REPLACED

This was a small 1000 point game against a home brew Chapter of Space Marines called, I believe, the Crimson Stars.  They’d taken Chapter traits that allow to fire Assault weapons within the -1 penalty if they advance, these would be highly mobile Marines.

1,000 points would be a real squeeze as I wanted to keep on working with my Nurgle Daemons and my Contemptor Dreadnought.  The only way I could make it work was to take the Nurgle Battalion and then two auxiliary detachments to fit in the Chaos Lord and the Dreadnought.  That would cost me 2CP, but I was planning on trying out footslogging Rotigus across the table so I didn’t need a whole load to deep strike him.  The Plaguebearers would have to lose their banner and the Contemptor take butcher cannons to make the numbers add up.

We rolled the Beachhead mission from Chapter Approved 2018.  There would be three objectives, one in the centre and one in each of the two deployment zones.  Starting from the second round you score at the start of your turn for each marker you control.  The one in your enemy’s deployment zone would be 3VP, the one in your own 1VP and the on in the centre 2VP.  The deployment map was Search and Destroy, so a quarter of the table each with a 9″ exclusion zone around the centre.

My plan would be to park the Dreadnought on the objective in my zone, walk the Daemons up to the centre and drop Nurglings to harass each flank of the Marine army.  The Daemons could, if it worked out, continue on into the enemy deployment zone.

The forces of Nurgle would get the first turn.

END_OF_DOCUMENT_TOKEN_TO_BE_REPLACED

This was a rematch against the home brew Space Marines chapter that I won a very narrow victory against in my previous game.  This was going to be a grudge match.  My opponent wisely prepared for this by considering my likely army when building his own.  I, on the other hand, continued with my recent pattern of just flinging Nurgle units at the table so that I could see what sticks.

My Nurgle Battalion took centre stage in the list alongside my newly finished Death Guard Contemptor Dreadnought.  I wanted to try out two “Dreadnoughts”, so also took my Helbrute.  I then wanted something to get up close to the enemy while the slower Nurgle Daemons were on their way in, so I took my winged Daemon Prince.  This lead to some compromises.  Ideally the Prince works will with Foetid Bloat Drones and the Contemptor would have been packing the two lascannons he was modelled with.  But there wasn’t enough points for that.  So it would be two Plagueburst Crawlers and a Contemptor with the cheaper Butcher Cannons.  I filled out a Death Guard Battalion with two units of Poxwalkers, a unit of Cultists and a Chaos Lord to give re-rolls to the Hellbrutes and to earn me some more command points.