I’ve gamed against the Tyranids a few times but they were played by a younger game who was picking up the game.  So up until now I’ve never really faced a serious and dedicated Tyranid player who was out to rip my Death Guard apart and had the tools to do it.  In this game that changes.

My list was a slight variation of the Zombie horde I’ve played in my last few games.  Tyranids are very flexible and can be built as pure melee monsters right up to heavy tanky shooters.  My list had to be something that could, potentially, take on all comers.

I stuck with the two large units of Poxwalkers buffed by Typhus.  They would be my tarpit, objective holders or melee units as appropriate.

My fast attack unit took Plagueburst Crawlers instead of Bloat Drones to shave off a few points.  The Crawlers aren’t quite as mobile, but they hit harder, are tougher and when they explode they do more damage.  Knowing that I lack anti-armour I wanted some big sticks on the table.

My gun line started with two seven man Plague Marines squads carrying three Plasma guns each.  A Chaos Lord would buff them to avoid overcharging explosions and would also lend his support to a Helbrute carrying a missile launcher and twin lascannons.  Two Foul Blightspawns could hang about the gun line waiting for deep striking big monsters or could “race” forwards with the Prince if that wasn’t going to be an issue.

Finally I went for Terminators again, I’ve been having fun with them recently, and a Chaos Spawn that filled the last 25 points in my army.  The Spawn would also help me to control some of the table and try to block deep strikes, which the Tyranids can be very good at.

We rolled the Four Pillars Eternal War mission from Chapter Approved 2018.  Four objectives on the board, at the end of each turn you’d win 1VP for holding more than your opponent or 3VP for holding all of them.  It’s important to not that only Troops can hold objectives in this mission.  There would also be an additional 1VP a round available for the player who killed the most enemy units.  The deployment map would be Search and Destroy with the two enemies in opposite quarters of the battlefield.

The Tyranids deployed first, it was a shooty army yet from Hive Fleet Kraken who can advance quicker (3d6 and pick the highest when advancing) and charge after withdrawing.  So this was going to be a army that would move quickly and not be afraid of getting into melee.  The army broke down into three main blobs of Termagants each one backed by bigger bugs and HQs.  I thought that they would be going for three objectives with a blob chasing each.

I certainly had that as my plan, taking three objectives, but I broke my army in two as I was hoping that my longer ranged shooting would help me.  My melee horde hung back a bit and would be securing the objective in my deployment zone and the one close to it.  The Prince and the two Plagueburst Crawlers would try and smash the Tyranids off of one of theirs and went as far forward as they could.

The Swarmlord is brave

The Tyranids had the first turn.  One Termagant blob moved to my left flank to try and seize an unoccupied objective, they didn’t quite reach it.  Another blob on my right flank began to move towards the empty objective near my deployment zone.  The Swarmlord was initially very brave, but something went wrong and his expected support didn’t move up quickly enough so he ran away behind the horde following him.  There was an awful lot of fire, which is the way with Termagants.  But it was pretty ineffective and the Tyranids did not get First Strike.

I made a bad decision in my first turn and abandoned the objective in my deployment zone.  I think that maybe I panicked and wanted to secure Objective 5.  Really not sure why I did this, I just lost focus.  I had enough Poxwalkers to secure both and should have done so.  The Prince and one Crawler pushed up on my left flank while one Crawler hung back to help deal with the incoming horde and make sure that I wasn’t knocked off of an objective.  My fire was also pretty ineffective.  I was trying to gun down as many Termagants as possible to stop the Tyranids being able to hold objectives but I couldn’t get get enough of the things.

The turn ends with both of us holding one objective each, no points to either side. 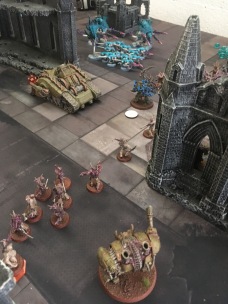 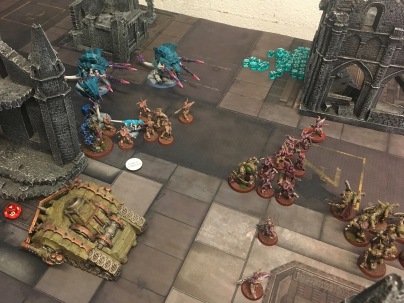 The Tyranids continue to push.  They kill the Daemon Prince, my Warlord, on my left flank but only have a few Termagants to hold the objective there.  On my right flank they’re chewing away at my Poxwalkers but thankfully not hurting my gun line.

On my turn I reorganise my defences and hold the objective in my own deployment zone again.  My gun line blazes away and Typhus and some Poxwalkers get engaged in melee. Only one Teragant survives but, on the whole, things seem to be going OK.  My Terminators have teleported onto the top floor of a ruin.  This means that the big bugs can’t charge them, but their fire is pretty ineffective.  But they’re there threatening the Tyranids rear, they’ll need to be reacted to which will buy time for my own lines to hold.

At the end of the round we’re both holding two objectives, but I kill the most units while the Tyranids pick up 1VP for killing my Warlord, it’s still a tie.

Both sides grind away at each other.  The Tyranids kill Typhus on my right flank but other than that not much shifts this turn.  We both still hold two objectives and both kill the same number of enemy units.

A bug breaks through! 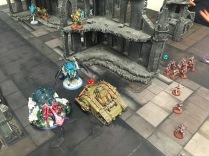 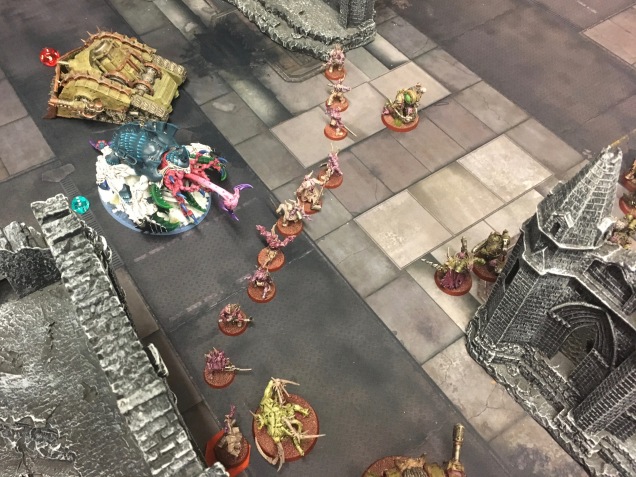 On my right flank the Tyranid attack falters and withdraws, but one Carnifex packing a whole lot of guns breaks through.  It fails its charge and does not knock my Marines off of objective 5.  On my left flank two big bugs move towards me to try and push me off of that flank’s objective.

My right flank fires back and the Carnifex falls, that objective should now be secure.  But I’m in trouble on my left.  I gun down one of the two bug bugs but one remains on a few wounds.  I’ve rearranged my lines to try and act as a screen but it could be nasty.  I also brought my Chaos Spawn out of hiding to help in the expected melee that would happen next turn.

We both still hold two objectives and neither side kills more enemy units than the other. 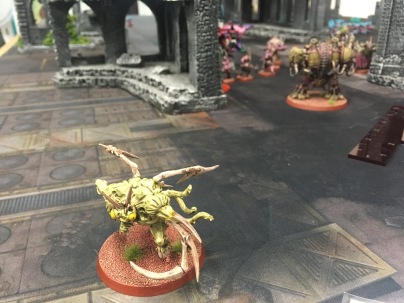 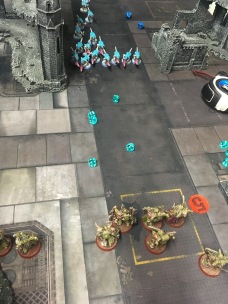 The Tyranids realise that things are looking tough for them, they’re running out of troops and their attacks on both flanks have been blunted.  The final third blob begins to move forward to try and inflict some casualties on the troops holding one of my objectives.  There’s an awesome amount of gun fire, but it’s weak and innacurate, my Plague Marines stand and make the Death Guard proud.

On my turn I immediately run my Spawn back into cover.  He’s a single model unit and would easily help my opponent kill more units than I manage in a  turn, so he’s best being out of the way.  Then I shoot, and I shoot well. The final bug on my left flank falls this turn, I can’t recall if he got into melee or not but it fell.  I also blow away the final Termagant holding one of the Tyranid’s objectives.

At the end of the turn I hold two objectives and have killed more units than the Tyranids managed, this breaks the deadlock and pushes me into a narrow lead.

We play a little bit of turn 6 to see if the Termagant horde can shoot my Plague Marines off of an objective, but it’s clear that they can’t.  The game is called at this point, we’re up against it time wise and it looks very difficult for the Tyranids to close the slight lead that the Death Guard have.

A victory, albeit a close one, to the Death Guard.