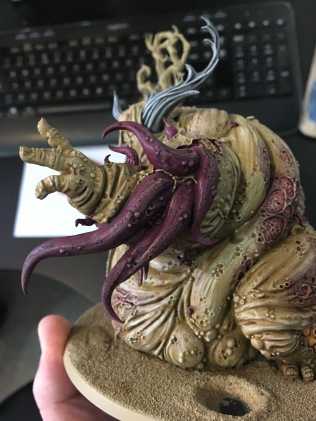 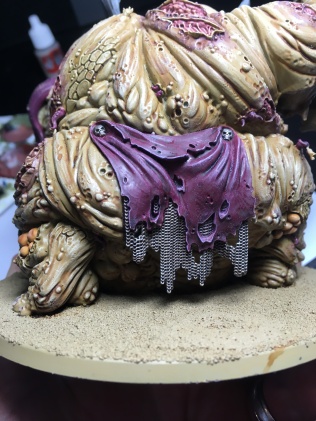 The recommended scheme also has a final layering of Fenrisisian Grey for the tentacles, but I didn’t have this so skipped it.

I think that these colours have ended up far too close to each other.  I think that if you layer you’ll shift the tones more and they’ll end up further apart, but I didn’t do that.  I’m considering retiring for some heavier drybrushing on the tentacles to help differentiate them.

The next part of painting Rotigus was working on the wounds in his flesh and the boils that he has.

After some research I settled on the following colour schemes.

Open Wounds – Base coat of Bugmans glow, wash with Carroburg Crimson & highlight with Cadian Flesh.  Around the wound I then faded in some Druichii Violet.

Cracked Wounds – A wash of Athonian Camoshade faded into the surrounding flesh.

Overall I’m quite please with it all. 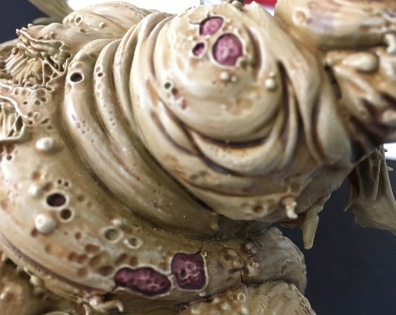 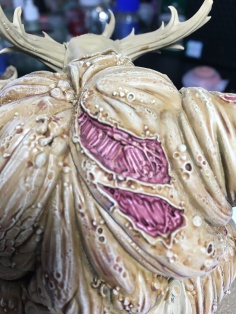 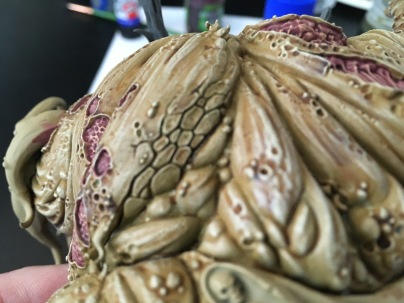 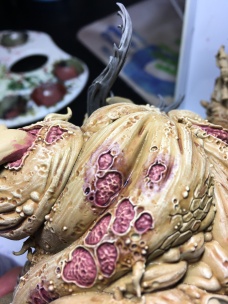 Violet around the wounds 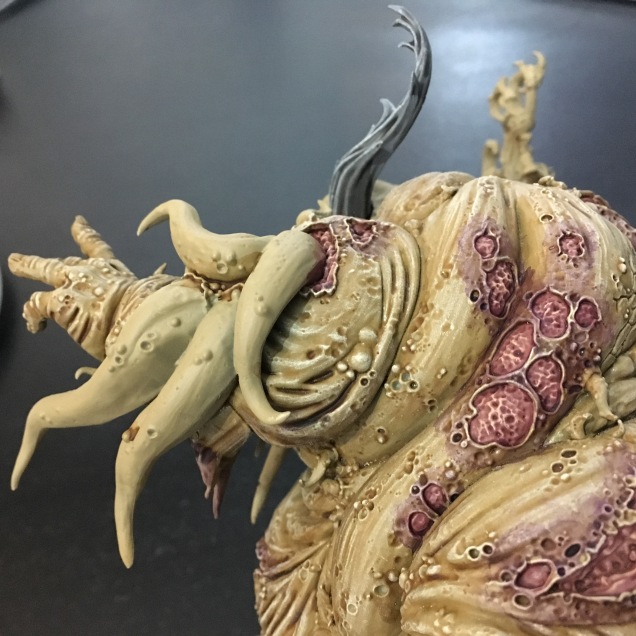 I still use the drybrushing method of painting rather than the layering or edge highlighting route.  The instructions on the box for this model are for layering, but I’d seen people online using the same colours for dry brushing so I went for them.  The colours would be:

I treated myself for the base coat and bought a can of the Zandri Dust spray paint.  It’s not cheap, but this is an expensive model that I want to do as good of a job as I can on.  I normally prime with a white Humbrol spray paint, but after some research I found that people were saying you can prime with the GW sprays too so I skipped that step.  It took about three careful thin sprayed layers to get Rotigus undercoats.  And when done it did look very good indeed, a nice smooth and solid colour had been laid down.

The wash of Seraphim Sepia was then applied fairly generously, no problems again and I think it’s looking good.

Finally there’s the drybrushing.  For this I also tried to up my game.  I normally use an old tatty brush to drybrush.  For this miniature I decided to dedicate some unused flat brushes to the job.  I then went at it fairly heavily with the Ushabti bone.  The skin of the Unclean One is packed with texture and detail and it took the highlighting really well.  Finally I did a much more careful and lighter drybrush with screaming skull making sure that I could the really raised areas and the edges of the wounds.

How do I thought it turned out?  Pretty good, not perfect but pretty good.  He’s much darker than the GW photos of the same paint scheme appear.  I think that’s because they’ve layered properly and the Ushabti bone then really lightens the model.  Dry brushing does not lighten as much so more of the base and wash remain visible.  But I’m still pleased with how this has gone.

So, Nurgle Daemons it is then, and for my birthday I was given a Great Unclean One.  This model can be built in two ways, as a regular Great Unclean One and also as the named character Rotigus.  I’ve painted an awful lot of Green with my Death Guard, and will be painting an awful lot more with the Nurgle Daemons, so Rotigus’ lighter flesh tones were appealing.  He’s also carrying a great big stick, which makes sense in the dakka filled universe of 40k, he wouldn’t want to face a machine gun without that.  So it’s a go for Rotigus.

The initial build is all pleasant enough, it’s quite  nice model to put together.  At this point it could be either Rotigus or the “generic” Great Unclean One.  But I’ve made my decision and I’m sticking to it. 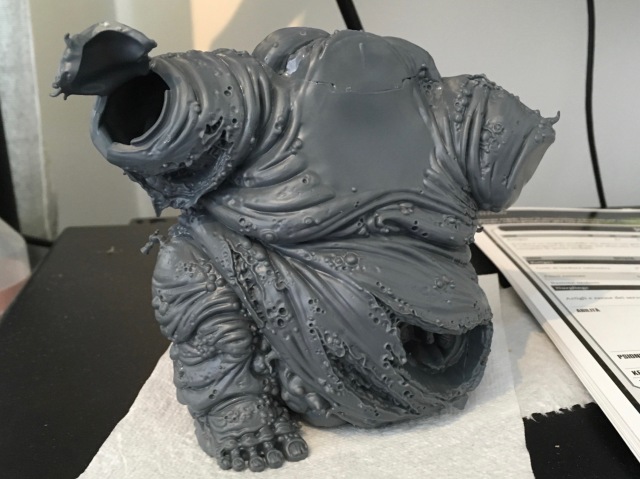 When it comes to the base I’d like to have a Nurgling sitting in a pool of goo, a miniature Nurgle hot-tub.  My first attempt to do this is to use a sand and PVA mix to build up a “crater”. 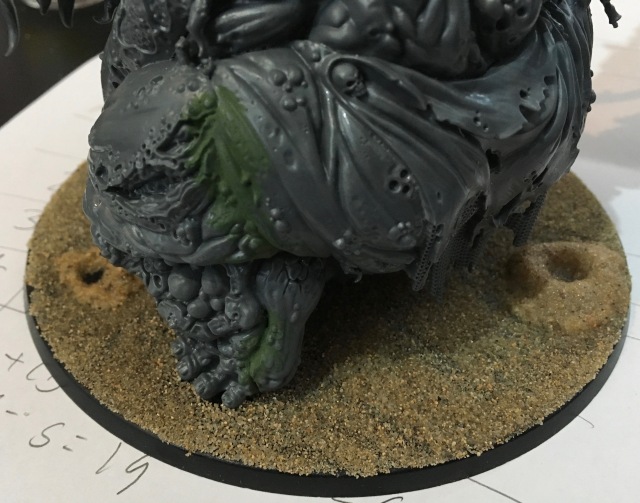 But this looked really unsatisfactory, it was clearly a raised bump over what was a very flat area, it just didn’t look right.  So I took the bold decision to strip the base and start again.  Sometimes you do have to go backwards in order to go forwards.  This model was going to be a big centre piece in my army so I wanted to be as happy with it as I could be.

So my next plan was to cut into the base and actually recess the “pool” into it.  I took a spare round base and made sure that it would fit underneath Rotigus’ base, this took a little bit of cutting.  I then cut a hole in Rotigus’ base and glued the other base underneath it as some kind of a cup.  I glued and sanded the base again and then added extra glue and sand to smooth out the sides of the pool and to build up a little bit of a rim around it.  And that looked a whole lot better. 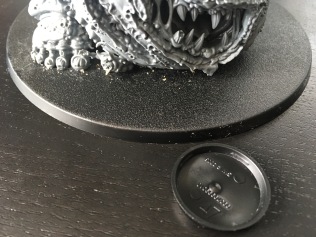 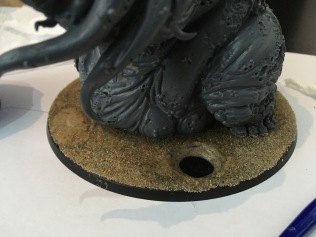 Next will be the painting…

I appear to have reached an answer to the question “What next?”, I’ve picked up the Chaos Daemons Codex and will be working up a Nurgle Daemon army to fight alongside my Death Guard. 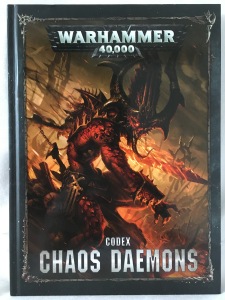 There are a number of reasons for this, reasons that overcame my reluctance to abandon my “mono-codex” stand point.

So there we go, Nurgle Daemons it is.  I will probably still grow my Death Guard as well but for now I have a new direction and a new army to get ready for the table.

I’ve been walloped a bit by the general hostility and unfairness of the universe, but things are afoot in the modelling and gaming but my world.  In short I’m looking at painting up some hordes, and given how I use my “only playing painted models” rule to make sure I keep up with my painting I’m looking at getting them done quickly.

So GW’s new Contrast Paints sound like an incredibly good idea.  It’ll be a new army and so doesn’t have to match my Death Guard forces, so I can do whatever I need to to get the job done.  So when I saw my FLG running a painting demo with the new paints I hoofed it down there and gave them a go.

This Poxwalker took me less than 5 minutes. 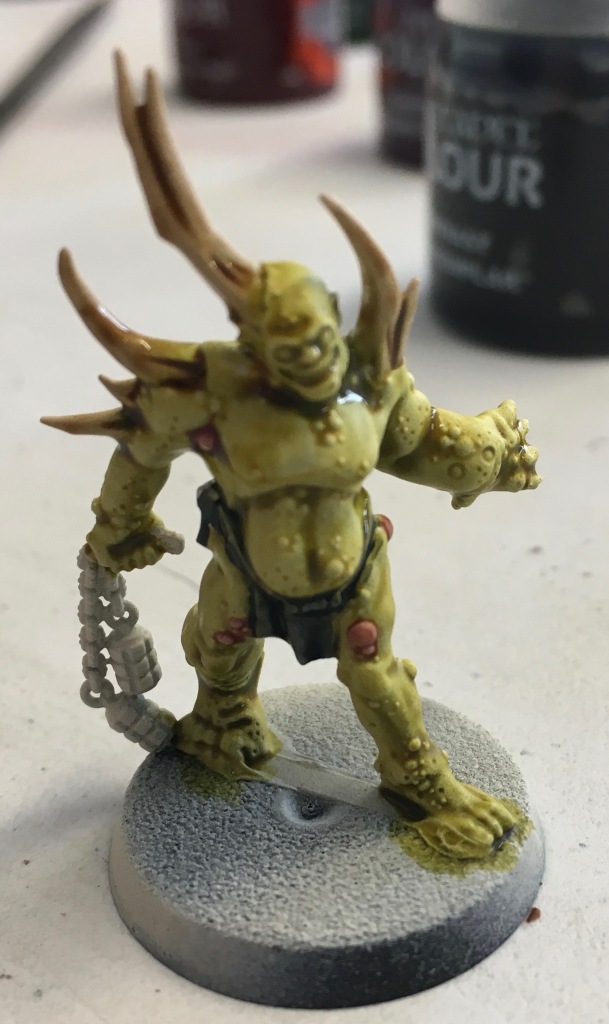 And he is the same chap with some of my other models. 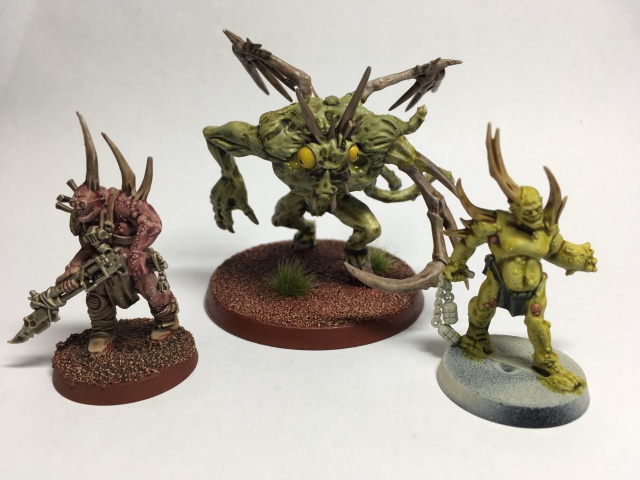 The Poxwalker on the left is painted using my initial quick technique that I used on the two units of twenty walkers that I have.  It’s about two thin base coats, washes and then highlights.  anti was pretty quick.

The Chaos Spawn is the method that I was thinking to use on the horde.  It was base coated white, washed twice with Athonian Camoshade and then highlighted with Nurgling Green.

And then there’s the new chap using Contrast.

I’m not sure if I’ll use this or not, it needs some further thought with a clearer head. 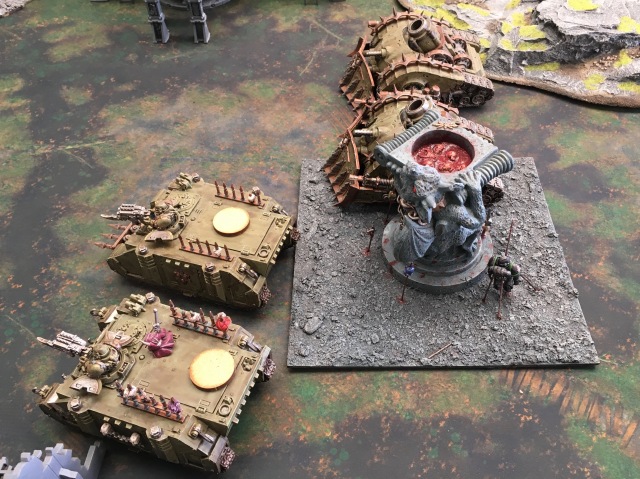 My list had three elements to it.  The first part would be a mechanised infantry group, something that could move pretty quickly.  There would be two Rhinos carrying infantry supported by two Plagueburst Crawlers.  The infantry would have a Malignant Plaguecaster, two Foul Blightspawns and a Chaos Lord for re-rolls.  These are all things that want to be up close to hurt stuff.  If I take the Fugaris’ Helm relic then the Plaguecaster can cause additional mortals out to 10″ rather than 7″.  This element would move quickly to grab an objective or to just get up the board.

The second part would be a backline.  This would secure my deployment zone and also have some long range anti-tank.  I do worry a lot about deep strikes and so took some Poxwalkers to give me some screening both to prevent deep strikes and to stop them being able to charge my anti-armour and stop them shooting.  The anti-armour itself would be Plasma equipped Plague Marines and a Helbrute both backed up by a Chaos Lord to re-roll 1’s.

The third part would be two Armigers.  I really dithered over this for a long time.  You’ll notice that my list doesn’t have a Daemon Prince or a Bloat Drone in it.  I’d have to give up my usual fast moving flying units to take the Armigers.  The Armigers are pretty flexible in that they can move quickly (by Death Guard standards) and threaten a variety of units with their S7 guns.  I also haven’t played them very much, so the usual flyers were out and the Armigers were in.  They could hang about shooting things at a distance supporting either the front or the back line.  But I’d have to be careful about units dropping in and getting them into melee combat, my Armigers are built for shooting and they’re not good at fisticuffs.

How would the Death Guard work without their rapid flyers?