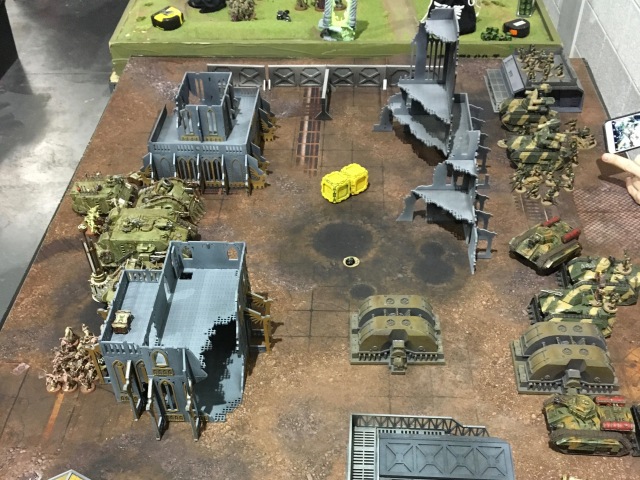 It’s been while since my last game against the Astra Millitarum but we finally got one booked in at Boards and Swords.  I’ve had three narrow victories against them and taken one pretty crushing defeat in return, this is going to be tough.

I was feeling quite unwell on the day of this game and I came close to cancelling it.  But I’d not had a game the week before, wasn’t sure if I could manage the week after and I hate cancelling on people.  So the game went ahead.  But I was more than a little fuzzy headed, so this gave my list a few drivers.

So with that in mind I stuck with my recent runs of trying out the Land Raider carrying Typhus and his Deathshrouds.  That’s over 500 points, so nearly a third of my list off of the bat.

I needed to get the Land Raider in close to drop of its cargo so I once again took two Plagueburst Crawlers as units that might distract fire away from the Land Raider.  They’re genuinely useful in their own right and tough so they should pose a difficult question about target priority.

The Land Raider was going to be my main long range anti-tank capability, so I wanted to be sure it could hit as reliably as possible.  So I took a Daemon Prince to let it re-roll 1s to hit.  The Prince could also join in the melee once Tyhpus disembarked and would be buffed by the Deathshrouds.  Points wise I couldn’t afford him with wings though, which is the first time I’ve ever played him this way.  I made him the Warlord and gave him Arch-Contaminator so that on the way into melee he could buff the Plageburst Crawlers melee weapons and once in melee he would buff Typhus and the Deathshrouds.

I took a unit of Plague Marines with blight launchers and a Foul Blightspawn that would ride in a Rhino.  Depending on the mission they could race off to grab something or pose another distraction to protect the Land Raider.  By giving them plague weapons if they end up near the Arch-Contaminating Prince then they’ll get a buff too.

I now needed something that would sit and hold objectives in my deployment zone.  So I took another unit of Plague Marines with three Plasma Guns backed by a Chaos Lord to re-roll the ones, what could go wrong with that I thought…  I also took a max-sized unit of 20 Poxwalkers to act as a tarpit and slow down any incoming threats.  Without Typhus to buff them they wouldn’t kill much and would die quickly, but, they should slow down incoming units so that the Plasma Marines can deal with them.

Oh, and two Chaos Spawn, that I didn’t know what to do with.  But I wanted them on the table so into the list they went.

This is good, I’ve played this mission a few times, less thinking for my fuzzy head.  I have a plan for the game.  I will hurl myself at that central objective and try to grab it, I will defend the marker in my zone and I will probably ignore the one in the enemy’s.  We’ll both get a point a turn for holding our objective and every turn that I hold that centre and the enemy doesn’t will net me two more points.  That’s enough to win the game. 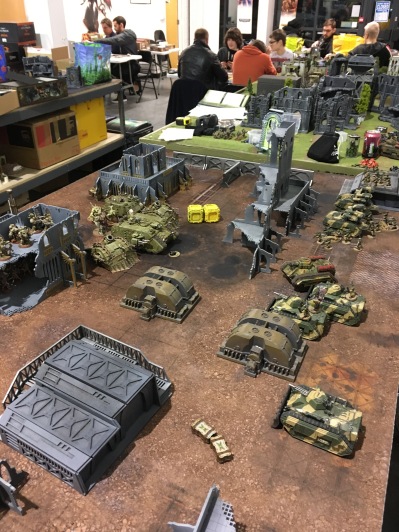 Another view of the centre. 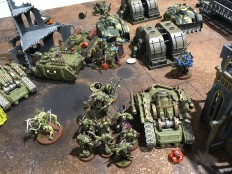 Carnage in the centre. 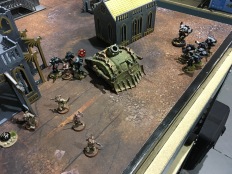 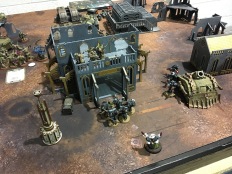 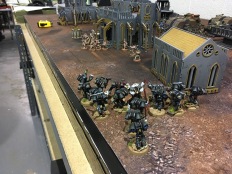 A bit of a squeeze.

Racing for the centre.